A post after a long time now! The last I wrote for my blog was in April. And it is August now. Probably one of the longest breaks in my blog writing career. But I was busy with work as usual. Then with my vacation and then with my new passion in Maemo. In case you are not aware, Maemo is the OS running on Nokia’s tablets namely the N800s, N810s and N900s. I recently purchased an N900 and am a lot involved with the upcoming MeeGo platform. MeeGo is a conglomeration between Nokia’s Maemo and Intel’s Moblin (as well as Linux Foundation of course). Intel had given away Moblin to Linux Foundation by the beginning of this year. Maemo was not able to lure application developers and did not contribute that much to Nokia’s app store (OVI) plans. So I think it was a good move to get together with Intel and create MeeGo isntead. I personally though would have loved if they didn’t create a new distribution and instead optimized something already existing (Linaro definitely was announced a bit late though). Some decisions of MeeGo running an RPM based packaging policy also puts a kind of hurdle for Debian loyalists like me. But anyways, for the moment it is Maemo 5 (also known as Fremantle) running on my N900 which has a deb packaging policy and which is what I am really familiar with.

I have to attend a lot many conference calls everyday and it is quite cumbersome to type in all the different conference codes and follow the other procedures before you are actually placed in the call. And all the time, you need to have the various codes in front of you. And lets say I am placed in a call and I am taking the call from my car. Now if my call drops (and I do know the spot between Malmö/Lund on E22 where there is no signal in Telia), I am not able to log into the call even if I have details on a sticky note in front of me. Of course I am driving and don’t want to get off my eyes from the highway for too long. These and other issues eventually led me to write the Conference Manager. To be frank, it was my colleague Joakim’s idea. He had developed a similar application for his Android device. And I wanted one for my N900 so I invested a couple of days from my vacation in July to code the application. 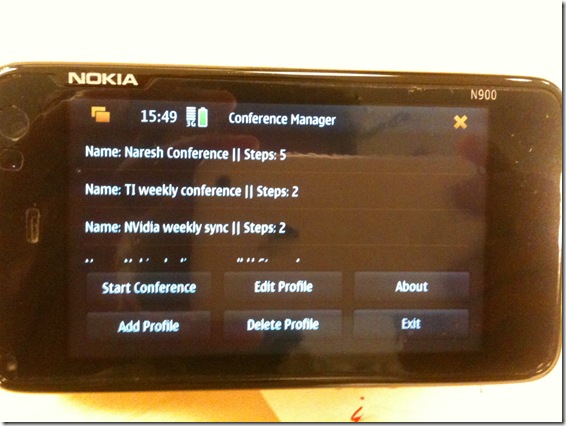 Maemo 5 development is a bit of a headache to setup at first. I will write about that later. But I got scratchbox up and running my Ubuntu machine. I used QT4 for development since it is also supported on MeeGo. All the UI and data structures are using QT4. The actual tasks of dialing a call, sending in the DTMFs, etc. is done using DBus calls to com.nokia.csd.call. There was a little problem finding that out since initially I thought I had to do something with Telepathy. Anyways, the most time consuming part of the application development was probably testing on the device. I somehow was only able to connect via WiFi to my N900 and it usually took a lot of time load the application in debug mode. Of course I was using QT Creator for the purpose. But now should not complain much. Nokia has promised to have a better integration between scratchbox and QT Creator in the future releases.

I have released the code under GPL. It can be found at: Conference Manager Source Code. The alpha release is available on the garage project at: https://garage.maemo.org/projects/confmgr. . The code is fully functional and I have had no problems for a month of use now. I will probably add a couple of features more and promote it to a 1.0 release soon (or when time allows). In the meantime, the project is also hosted on the Fremantle extras-devel and extras-testing repositories at: http://maemo.org/packages/view/confmgr/. After a 10 day mandatory quarantine, I suppose I could promote it to extras and later on to OVI. The code is self-explanatory and the best part is that the software works with any conferencing system. Of course you need to figure out how many steps and how much delay between various steps needs to happen. But that is a one time activity and after that everything is automated. The 1.0 release will also have an option to use templates i.e. the conferencing system steps and delays that I have already tested with. The profiles are stored in an XML file in the MyDocs directory. And you can have virtually innumerable profiles (atleast as many as the QList can hold).

So have fun using it and do give some thumbs up on the Fremantle repositories. I would also like to have your feature requests and bugs if any. Hope you enjoy the screenshots and the application better still.